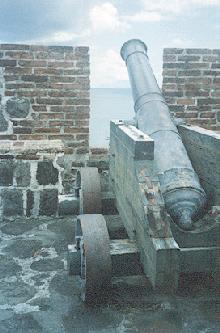 Close to 500 years ago, an Italian sea captain financed by Spanish royalty went looking for new lands to conquer, if not to conquer, at least to claim. He found a vast amount of unexpected real estate, as history has so often recited, and it was he who named this island St.Martin. Whether Christopher Columbus landed here, anchored here of merely sailed past, he literally put this 37 square miles of mountain top on the map.
Sint Maarten (Dutch spelling) or Saint Martin (French, Spanish, Italian, English spelling) was named for St.Martin of Tours on whose feast day, November 11, 1493, Columbus first saw these white sand shores.
The island name, incidentally, is generally pronounce the English manner, simply St.Martin. St. Martin of Tours, for those who might be curious, lived from 330 to 397, was a bishop, a missionary and father of monasticism in Gaul. he was one of the most revered saints of Western Europe, one of the first persons not a martyr to be publicly venerated as a saint.

The Indians were here first ...
When Columbus sailed these seas, St.Martin was populated, if populated at all, by Arawak or Carib Indians.
The Arawaks were subjugated by the warlike Carib Indians from South America a short time before the arrival of the Spanish who followed in Columbus' wake. The English work cannibal, we not in passing, is derived from an Arawak word which referred to the Caribs.
The Arawaks were a relatively cultured people who introduced agriculture, fashioned pottery and whose social organization was headed by hereditary chieftans who derived their power from personal deities called zemis.
The Caribs, on the contrary, concentrated on warfare. They killed and ate the Arawak men, then married the Arawak women. How the Arawak women felt about that is not recorded, but it is interesting to note that the surviving language was Arawak.

Then came the Spanish ..
As the Spanish conquered each island, they rounded up its Indians and put them to work. By 1550, a few Arawaks remained on Cuba and Trinidad. The Caribs' territory was not completely conquered until the mid-seventeenth century when most of them perished in the struggle between the French, English, Dutch, Danes and Spanish for control of the West Indies. The Dutch first began to ply the island's ponds for salt in the 1620's.
Despite the Dutch presence on the island, the Spaniards recaptured St.Martin in 1633 and one year later built a fort at Pointe Blanche to assert their claim. The Spaniards introduced the first slaves to the area in the sixteenth century but the main influx of slaves took place in the eighteenth century with the development of sugar plantations by the French. Slavery was abolished in the first half of the nineteenth century, whereupon the British imported Chinese and East Indians to take the place of slaves. Thus, these islands are peopled by a mixture of Amer-Indian, African, Asian and European peoples. West Indian cultures are, consequently, exceedingly rich and varied, can scarcely be matched in other parts of the world.

Ship Ahoy! Pirates in the Bay!
In the mid-sixteenth century pirates, privateers and smugglers were attracted by the increasing volume of shipping, especially since cargo included Mexican or Peruvian silver. Spanish defenses, although extensive, could not prevent all raiding in so large an area. Sir John Hawkins, Sir Francis Drake, Sir Henry Morgan and William Dampier were among the English buccaneers; at the same period the Dutch "Sea Beggers" (Geuzen) and French Huguenot privateers were active. As for the Americans, colonists there found it difficult to form a new navy during the American Revolution because over 1000 privateers were licensed in that country. Privateering, theoretically abolished in 1856 by the Declaration of Paris, was eliminated only in the twentieth century as the Seventh Hague Convention by the states' assumption of full responsibility for all armed merchant ships.
So much for the three centuries of "Yo ho, my hearties" and "Fifteen men on a dead man's chest" . . . rumors of buried treasure on St.Martin persist to this day but if any has been found, the finder's keeping and not telling. The word buccaneer, by the way, comes from the French word boucan. French privateers smoked their meat on grills called boucans, thus the appellation. In another French translation, boucan means noisy - they no doubt were.

The warring nations ...
Privateering, smuggling and piracy were condoned, even encouraged, by the various nations fighting for control of the Caribbean (not the knighting of several English privateers). England, Spain, Portugal, Denmark, the Netherlands and France island-hopped by means of naval attacks; control of the seas was the name of the game. Between 1630 and 1648, the Dutch seized Curacao, Saba, St.Eustatius and St.Martin, all valuable as trading and smuggling depots. The French, whose Compagnie des Ilsles d'Amerique was formed in 1635, began its joint rule of this island in 1648 (for the previous fifteen years, Spain had controlled the island except for a period of two years from 1631 to 1633 when the Dutch were in power). A breakdown of periods of rule by the Netherlands, England and France gives a good idea of the tempo of the times: St.Martin was under Dutch rule seven times between 1631 and 1816, for as short a period as ten days and for as long a period as 180 years plus.
The English seized control three times during these years for periods of 10 months in 1781, one year and eight months from 1801 to 1802 and six years from 1810 to 1816.
The French Governed the entire island four times between 1672 and 1801. St.Martin was "ownerless" for 13 years and three months, from January 27, 1690 to April 10, 1703.
The Dutch have been on (and off) St.Martin since the 1620s, and it was here that Peter Stuyvesant lost his leg, earning the nickname Peg Leg, while unsuccessfully attacking the then controlling Portuguese forces. The scene of the battle was Little Bay hill and legend has it that Stuyvesant landed his ships in the bay beyond, Cay Bay, then led his men up Cay Bay Hill in a surprise attack on the Portuguese at Fort Amsterdam. Despite Stuyvesant's subsequent necessity for a wooden leg, he went to America where he governed Nieuw Amsterdam before the British took it and renamed it New York.

The patroons and the chevaliers ...
Early settlers depended on tobacco as their main cash crop and employed European labor recruited either by indenture or by penal sentences. Both proved inadequate and by the middle of the seventeenth century the small landholders were departing and most island planters turned to sugar as the most profitable pursuit and to West African slaves as the only form of labor available in sufficient quantity. Sugar production necessitated the use of considerable acreage, therefore comparatively large estates came into being. Slaves were imported by the numbers and soon exceeded the small population of European planters, overseers, merchants and professional men. The growth of trade in sugar, rum and slaves and the mounting value of sugar duties made the possession of West Indian territory a chief aim of European colonial powers. Every major European war of the eighteenth century was reflected in heavy fighting in the Caribbean and every peace treaty included transfers of West Indian islands.
West Indian prosperity was adversely affected in the nineteenth century by the competition of cheap sugar from other parts of the world, and by the abolition of slavery (abolished on both sides on St.Martin by April 27, 1848). For the West Indian territories, the nineteenth century was by and large a period of impoverishment and neglect.
But - then came the airplane and, bless them, the tourists.
Indians, pirates, slaves, affluence and poverty, war ... St.Maarten/St.Martin has seen them all. Her peoples have endured, have come up smiling, not inanely smiling but courteously smiling, smiling with dignity, smiling with pride. Two governments guide 37 square miles in peace. Thousands of visitors arrive annually from all over the world. In its own quiet way, St.Martin/St.Maarten, the Friendly Island, has found its place in the sun.

Back to Island Information
Back to Luxury Villa Catalog